The Apocalypse Will Kill Your Child, How Can You Turn Your Head?

Posted by sillymickel in History on July 7, 2009

The Apocalypse Will Kill Your Child, How Can You Turn Your Head?

There are topics that you will rarely if ever hear in the mainstream
media. It’s not that they’re not true; it’s that these true things
are…well, is there such a thing as too true? Truth that the vast
majority of people will either not hear, or will distort, will deny,
will conveniently find hard to understand (i.e., they will retreat into
confusion), and so many other things. Obviously, by the title, you
already know the kinds of truths I’m referring to.

Our species
has never been confronted with such truths – facts about the inevitable
demise of our entire species in short order, unless something on a
massive scale is done. And it seems our systems have no capacity for it
– for indeed such an event has never occurred on our planet in its
entire multibillion year history. So the fact you’re even
listening, fully aware of the title, proves you are one of the few who
are opting to know the truth — however disturbing — rather than

turn
your head, as an unbelievable number of people are currently doing, to
the likelihood….sorry, that’s not something people want to know; but it
will be a certainty unless people get the courage to do something,
which necessarily of course starts with LOOKING at the problem! OK,
I’ll try again, this isn’t easy for me either. The cumulative
scientific evidence relating to the fate of this planet has been
accelerating in the direction of there being little to no hope that
there will be much, if any, life on this planet, at some point only 20
to 50 years from now. So as I was trying to say above, many people are
currently turning their head to the likelihood that we will all be dead
in what will probably seem the fastest decades ever. What
makes this likelihood so disturbing is that many people know this and
yet don’t care, some even get a charged up thrill, or sense of power at
the prospect, and many others just can’t wait! Sadly they have certain
misguided religious beliefs that have turned this most abominable
thing, wiping out the efforts and strivings and occurrences of billions
of years over 8 billion Human souls alone, in current time, and
negating the passionate struggles of trillions of humans prior to us
who wanted more than anything else to leave the world a better place.
But take a cynical — maddened — generation or two, and they may as
well never have lived. Why am I saying this? If you have
children, or grandchildren, even if you might not see it, what kinds of
parents exist now that blithely turn away from the trillion alarm fire
that is already waging, that will consume their beloveds in ways too
horrible to contemplate? I don’t understand it, for in any other
situation where they would be threatened; wouldn’t many even risk their
own lives? I need to say this because, despite the madness
surrounding us in the minds of people stressed with problems of all
kinds that are now at unprecedented levels, I have faith in God and in
the nobility of Humans at their base. I believe that more and more will
not only face this horrible darker-than-night cloud looming and rushing
us from the horizon, but will deem it to be the one worthy thing left
to do, whichever way it goes. I am using my God given skills of
communication and intellect, along with a lifetime of study into the
human mind and its healing, I know there are other’s like myself right
now attempting to wake up the noble spirited, the heroic among us, who
once convinced will add whatever unique qualities God has blessed them
to this once in a multibillions chance to be good, kind, brave, hard
working , sympathetic, heartful, strong, God-loving, life embracing,
laughter, song, and children loving Humans again. Humans, not
greedy beasts of prey with green in their eyes and their blood, who
have been taking over this planet for several decades now, for
idiotically selfish ends, and so maddened we have already seen the
first incredible detonation of their unconcern for this planet, all
God’s creatures on it, and even their own offspring, in this collapse
of an entire global economic system in what seemed practically to be
overnight. So when I think that the media is soft peddling
this vital truth; as if providing the opium of pleasant reverie to a
sick person, instead of providing the truth and giving the person the
less pleasant and more strenuous options of fighting for one’s health;
when I think of them as deciding for us, as if we are dying children,
who they think they are being compassionate to when saying those things
“you’re going to be just fine” etc., even as the patient takes the last
breath. I think of this as enabling us in an addiction and even
covering up the suffering that might get us well. Taking a look at the
media in this light, I am offended and feel disrespected; for I am not
one who appreciates being pampered and protected from upset, when it
means that it will guarantee my death, do you? For if a great
many people don’t quickly and radically reverse their lives (and no I’m
not talking boy scout recycling efforts), I’m talking about the gearing
up and urgency that would need to be far greater than that of the last
world war — how can it not be seen that that holocaust will seem a tea
party alongside what’s coming? But it is not warriors we need, that’s
part of the problem. We do need people as disciplined and caring, not
just of their buddies, but of all life, human and non-human, of all
creation that God in his/her great love for us and all life masterfully
crafted, slowly, carefully, meticulously, over a near eternity this
incredible, planet, as finely balanced and perfect and precise, and
wondrous and beautiful in infinite ways, precisely moving in perfect
harmonious exquisite synchronicity of infinite living elements through
the seasons, over the years, languorous and slow and allowing for a
plenitude of experience, of possibilities for joyous play, exuberant
and bountiful youthful sense of power, pride, belonging — for ALL
creatures, and infinite number of them — each of them single
individuals sharing with us this possibility of joy, wonder, happiness,
laughter, pain, grief, wisdom….this divine adventure taken by so many
humans even, each doing their best between the poles of the monstrous
and the angelic, creating in the end, whatever the outcome lives as
different, as unique, as incomparable as any snowflake to another.

And
all the while, surrounded from birth, breathing the divine, God always
so close you can’t see, but in every little thing pushing you to the
exquisite slow, painful then wonderful unfolding into greater and
greater wisdom, goodness, love, truthfulness and loving of truth — no
matter how long it takes, or even lifetimes — slowly, slowly, turning,
turning, expanding, flowing ever outward in wider and wider
encompassing surrounds of wisdom and love — no matter how long it
takes– and on the way the dawnings of blissful openings of being
leaving the darkness of pain and ignorance more and more at our roots,
just as the lotus grows out of the much of the dirty swamp, feeding on
that much for sustenance, just as our hardships, mistakes, even our
cruelties lead us in time that much more beautifully and committedly
loving of love, of life, of goodness, of God, and our eyes every more
aware of the beauty always there but more and more radiant as the
darkness slowly dissipates, and the lotus reaches its tender shoot
higher and higher into the murky water, it too in time becoming
increasingly aware of light that is above and that the darkness is more
and more in behind it, until, just as we, there is that moment of
arriving on the water surface and feeling and breathing being free and
so joyous, blissful, and understanding of the marvelous divine
perfection of the experience, even when it seemed hopeless, just as we,
and in gratitude and glory it unfolds its perfect, delicate, joy in the
expressions of joy that are the splendid beauteous aromatic creations
that we call its many petals, but for the lotus is its song of
gratitude, as much as our unfolding may open our hearts so deliciously
loving and alive that we must sing to God, to Love, to the
Consciousness that is the only Existing thing and equally coursing its
wondrous way throughout all creation — lotus, Human, in the loving
ministrations of all God’s creatures toward each other as we feel the
attraction of like to like, of divine to divine….. 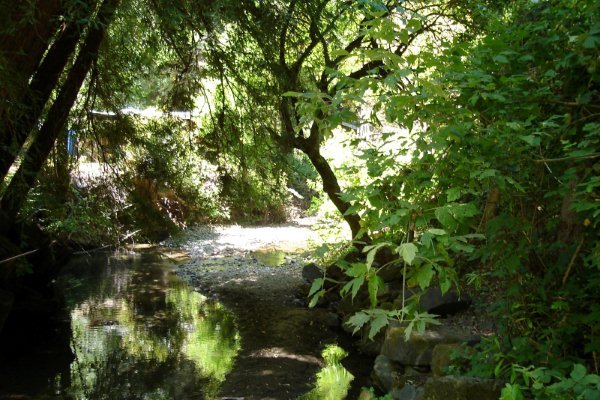 That was a time when flesh decided to really
stray from remembering and to really become solitary and alone,
creating the darkness, which the light is so much sweeter by, creating
the horrible endless times of struggling, of violence, of ego over ego,
with no one hearing, no one listening, but every simply babbeling out
THEIR world, their sounds, “the song must be like this!” “It is my
song.” “I am divine, who the hell are you to sing while I’m composing
my next chorus!?”

Future Earth Rebirth – the Primal Landscape
Listen in on SillyMickel’s own impassioned rendition of this blog, called “Apocalypse Emergency” http://media.entertonement.com/embed/PlayerText.swf