Enlightenment Overthrown: The Purposeful Undermining, by the Wealthy, of Higher Education in America to Prevent Sixties-style Free-Thinking

(No Smarts for YOU!)

In this context at no time was there an opening for the kind of rational or thoughtful, peaceful and considered pursuit of truth, insight, or enlightenment that had characterized

the eras that had actually led to the birth of America and its system of democracy, freedoms, and rights. By this I mean that since 1973, there was little room in America for any of the elements that characterized the Reformation, the Renaissance, the Age of Reason or Rationalism, or the Age of Enlightenment–whose adherents and tenets spawned the American experiment.

Can’t have liberal arts, it’s got the word “liberal” in it.

Indeed, I personally observed the downfall of the ideal of education in the liberal arts. A liberal arts college education had been regarded, since the birth of America, as a preeminent basis for further education and for life and career in general for those who would be among the educated and eventually the leaders and decision-makers of society.

Its ideals came directly out of the Enlightenment and Renaissance ideals of a well-rounded, diversely educated, and broadly knowledgeable individual and citizen. It was wisely considered that such broadly knowledgeable and broadly thinking leaders would benefit society in the wisdom, social consciousness, and moral conscience, indeed, selflessness, and social service ideals that would be part of that kind of exposure to diverse views.

But the Vietnam War had seen increasingly larger degrees of complaint, criticism, resistance, and defiance to its pursuit from these liberal arts campuses. I was on campus and was part of it. I also saw how the campuses were purged of the liberal thinkers–professors were fired, departments of philosophy, religious

studies, history, and the other liberal arts were cut back, often to be eliminated entirely. It had become clear to the people at the top that they could better manipulate the masses without free thinkers in the way. They did not want smart people noticing, that’s for sure.

We stormed the administration building & found the documents—the letters from wealthy benefactors & alumni.

The Vietnam War protests brought the suppression/repression out in the open. They actually fired professors on my campus, not because they were radical or speaking out against the war, but because they were cutting back departments that had anything to do with the Humanities—even the social sciences, religious studies!!!…anything that involved encouraging students to be independent thinkers or to learn anything different from the elementary and secondary school propaganda we’d been taught before. [Footnote 4]

We stormed the administration building and found the documents—the letters from wealthy benefactors and alumni insisting on this change or they would stop their funding. This was a concerted effort by the wealthy elite that hit all the liberal arts institutions/universities in America. 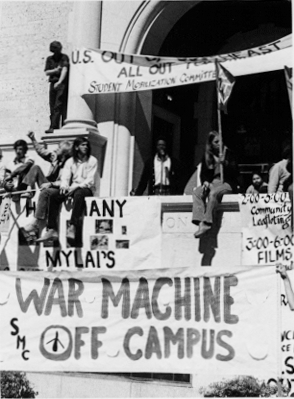 We demanded the Dean appear on the steps of the Administration building and answer to the charges and respond about the documents, as a condition of us leaving the building. He showed up, sheepishly, and mealy-mouthed his way through his responses to our evidence. He never denied it.

Some students chipped in (what little they could) to pay for some profs to continue teaching the next semester. We couldn’t use any facilities; we sat on the grass, outside. Of course, we could not afford to continue to do this; nor could the profs get by on the $1—$25 voluntary donations!

People like to dismiss efforts such as mine and those of my cohorts at this time as trying to dredge up the battles of the Sixties, to relive or redo the past. This ignores the fact that this battle is has not gone away at all but is simply being ignored…and consciously dismissed. It is as much here as 200,000 people were there in Wisconsin not long ago, though the media ignored and dismissed that in keeping with their insidious obedience. It is as much here as that we are currently surfing the tsunami of a WORLDWIDE OCCUPY movement addressing all the issues of this culture war, class war. Meanwhile the media exaggerates every Tea Party twitch involving handfuls or at the most hundreds of people and broadcasts far and wide every trivial pronouncement coming from their gang of cartoonish figures. 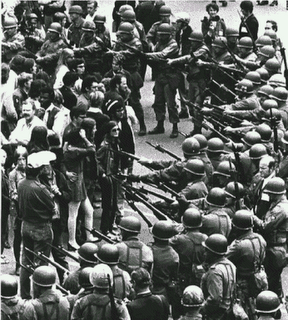 So yes, we are still fighting this culture war. For not only did it never go away,

not only has our side not been heard, not only has the other side pounded our positions into rubble; and shouted down, ridiculed, slandered, and misconstrued our points to their own malevolent ends, but… We ain’t won yet! 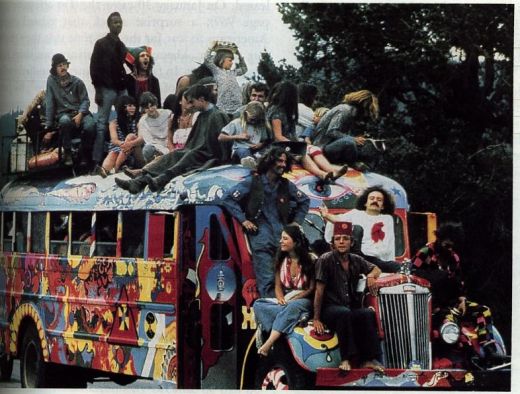 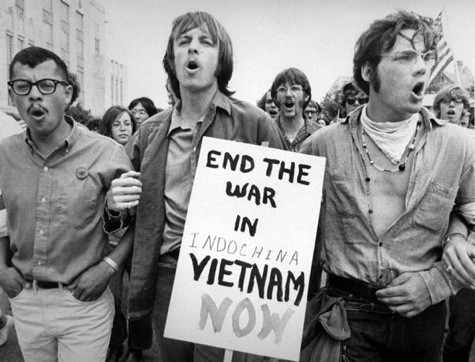 This entry was posted on October 8, 2011, 9:53 pm and is filed under activism, Class, Culture, economics, globalrevolution, History, individualism, nonconform, philosophy, Politics, spirituality, US. You can follow any responses to this entry through RSS 2.0. You can leave a response, or trackback from your own site.