You Didn’t Really Believe Elections Had Anything to Do With Issues, Did You? Biting the Feeding Hand … Perinatal Rage and Panicky Electorate: Healing Crisis, Part 3

Getting Sick to Be Well, Part Three: Seriously? You Actually Think Elections Have Something to Do With Issues? Biting the Feeding Hand … Perinatal Rage and Panicky Electorate

More recently these baby-boomers have been coming into the triumphant phase of their lives. They make up the largest sector of the electorate, and their influence is reflected more as they come into positions of power in the media and elsewhere.

The Angry Electorate and Boomers 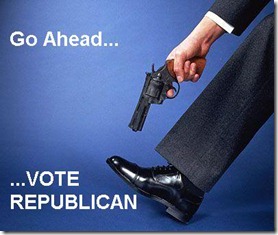 But their influence has been diffused and confused because of the anger of some of them. Their irrational rage—combined with the reactionary consciousness of the Fifties Generation, many of the Fifties Gen children of Yuppies-Gen Xers, and the remaining WWII folks—has most often skewed election results against the Boomers interests and their true desires. Though not the majority of boomers, enough of them expressed their rage to swing election results in favor of the other side.

Beginning in the 1992 and 1994 national elections, these baby-boomers exhibited their perinatal influences in contributing to the totally unexpected phenomenon of the “angry electorate.”

At the time, pundits and media analysts were at a total loss to explain the rage of the electorate that was affecting these elections. In 1992, they were totally surprised by the showing of three men in particular—Jerry Brown, Pat Buchanan, and Ross Perot—who seemed to have one thing in common: the angry tones and rebelliousness that characterized their speeches, as compared to others. [Footnote 1] 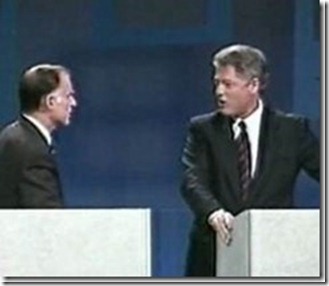 The demeanor of these candidates was at such odds with the other candidates that when Bill Clinton one night responded angrily to a comment by Jerry Brown about Hillary, Clinton’s wife, it was that part of the debate—of Clinton being angry, all issues aside—that made the news that night!

Though the rage of the electorate in 1992 caused the Brown, Perot, and Buchanan phenomena, it was split among them, so Clinton ended up winning. 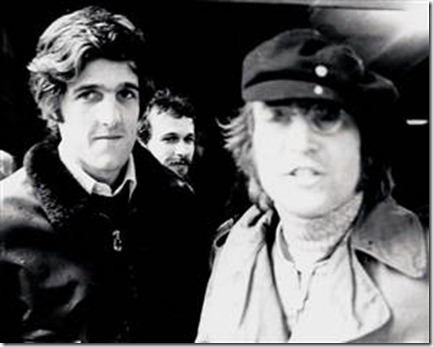 This of course was also OK with the baby-boomers in that (1) Clinton and Gore were baby-boomers like themselves and (2) in the race against Bush, Clinton was the challenger, and thus the rebel; and Bush was the “bum to be thrown out.”

However, this rage did not go away after the election, which highlights its having perinatal origins. In fact, after the shortest “honeymoon period” in history, by some accounts, it became directed at the most likely target/center—the President, Bill Clinton, himself. 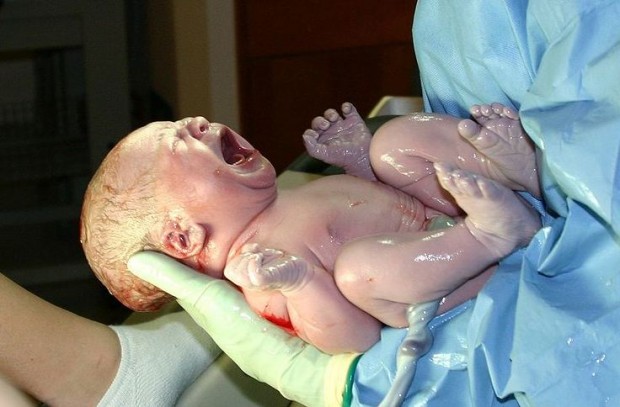 We all know how despite the successes and progress of Clinton’s first year, he was especially singled out for ridicule and denigration by the media. He could not seem to do anything right, and the most incredibly outrageous behaviors were attributed to him. 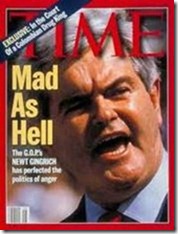 This rage spilled over into the next year and, sure enough, during the midterm election—the issues be damned—the angry electorate was in a mood to “throw the bums out” again. It did not matter the party….I do not claim that all those of my generation are always as politically astute as they are angry.

The Republicans called it a “revolution.” It was simply the acting out of an electorate in the throes of perinatal feelings—that is, feelings of frustration, 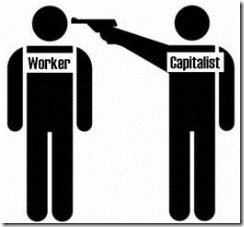 being “tied up” by red tape, an inability to go forward…that is, up the economic ladder—wages had been stagnating since the early 80s…being overcontrolled and pushed around by regulations…big government being the big mother womb keeping the fetus locked in and unable to move…and out of all this, the consequent anger and rage.

At any rate, succeeding elections bear out this analysis of an angry electorate. In 1996, despite the much ballyhooed “Republican Revolution,” sure enough, the electorate was spoiling to “throw the bums out” again—only this time it was the Republican Congress. 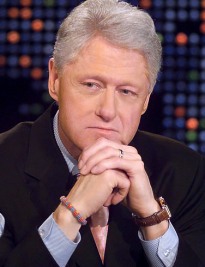 So there were Democratic gains at the time.

And in 1998, when everything pointed to a huge Republican landslide because of the Lewinsky scandal, the electorate again showed their rebellion and anger toward both the pundits and the Republicans who had been lambasting them with details of the scandal for nearly a year by giving the Democrats gains again! [Footnote 1]

In 2006, 2008, and 2010, it was an angry electorate reeling against oppression; and in the case of 2010, doing it mindlessly, against their own interests. If there were not perinatal charge to all this, Americans would not be so irrational about their choices. 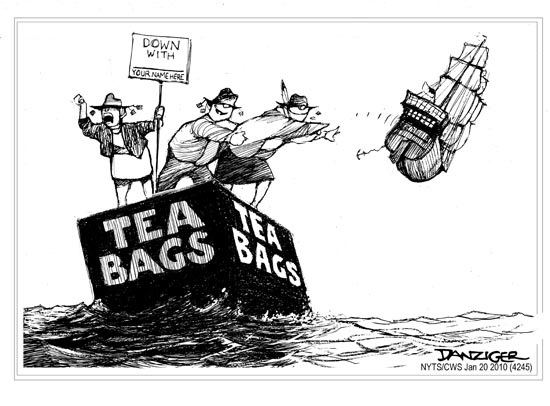 People have had good reasons to feel oppressed since the Eighties when Reagan began the giveaways to the rich and the budget cutbacks, continuing to this day, that have caused the masses to feel constricted and oppressed.

Yet, if this did not result in their being perinatally overloaded so that they cannot reason, they would not have been able to be led to fight their own interests as they were in 2010 and in an ongoing way as exemplified by the Tea Party and the success of right-wing agendas.

Reacting, Too Angry and Confused to Think 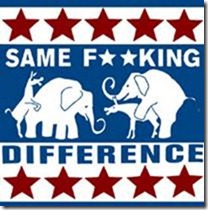 Another aspect of this irrationality on both sides of the political spectrum has to do with this idea that there is no difference between the two major parties. Feeling oppressed perinatally is characterized by a pressure from all sides simultaneously. 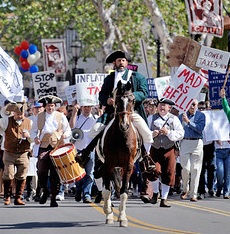 There is an inability to distinguish or discriminate between forces that are helpful and those that are dire, as any and all developments seem threatening in situations of crisis. In a situation of overwhelm, further, there is an inability to think clearly. One just fights back, explodes, reacts. It’s no coincidence that righties are called reactionaries. 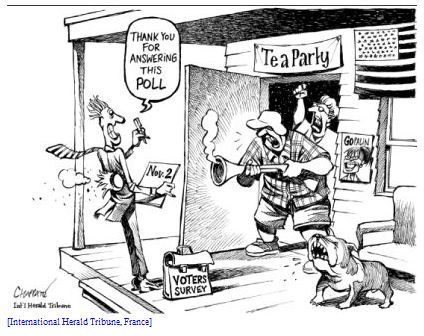 The upshot is an inability, under the pressure of perinatal feelings, provoked endlessly by actual oppression economically, environmentally, socially, and culturally, to rail against any authority, to bite the hand that feeds one. This is exactly like the panicked swimmer who in danger of drowning fights off his or her rescuer.

Can anyone at this point still maintain that the politics of the last few decades had anything at all to do with ideology or issues? 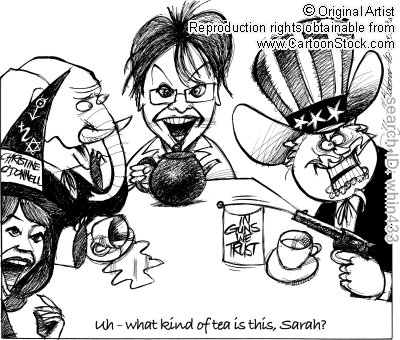 1. See “It’s the Attack on Privacy, Stupid! What Republicans and Pundits Don’t Get About Clinton’s Support,” on the Primal Spirit site, for more on the angry electorate and how it played out in the 1996 election.

Return to Wounded Deer and Centaurs – Being “Weller,” But Appearing Sicker – Perinatal Awareness of Boomers and Beyond: Healing Crisis, Part 2

This entry was posted on July 18, 2012, 6:46 am and is filed under activism, authenticity, being yourself, Class, Culture, economics, Generations, globalrevolution, History, individualism, nonconform, occupywallstreet, philosophy, Politics, psychology, spirituality, US. You can follow any responses to this entry through RSS 2.0. You can leave a response, or trackback from your own site.