Culture War, Class War, the third book – of the four being published in October-November, 2013 – is now completed also.

This book can be ordered now. 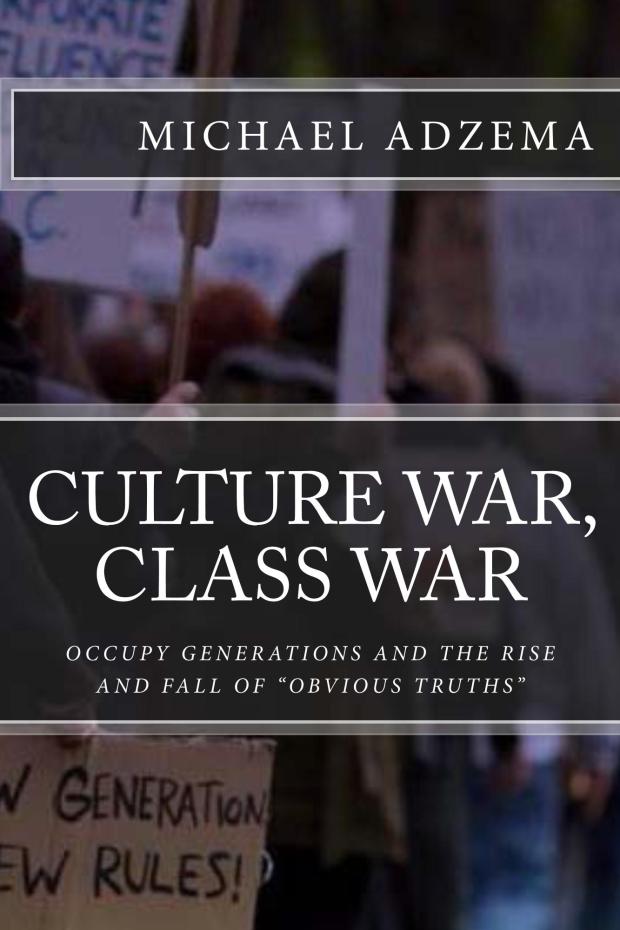 OCCUPY GENERATIONS. THE RISE AND FALL OF “OBVIOUS TRUTHS”

Class War is disguised as Culture War. The 1% foment Culture War among the 99% to distract and cover their real economic motives.

This book looks into why America’s “privileged class” — its “royalty,” “blue bloods” — started a “culture war” against the middle class, working class, the poor … and the educated, artists, and humanists in the early 1970s. We discover how their fear of Sixties activism panicked them into an all-out assault against elements that threatened their wealth and privilege in all institutions of American society — media, education, medicine, government, politics, publication, religion, especially higher education — and restructured them for their ends.

Culture War, Class War—Occupy Generations and The Rise and Fall of “Obvious Truths” is about how that reversal and restructuring happened and what has transpired in the last fifty years to bring us to this crisis. We see how Americans’ minds, personalities, beliefs, and their daily lives were orchestrated to a tune not theirs any more, but one that was sweet and harmonious to the profit-takers.

We see how this culture war, class war continues today: blatantly so in the Tea Party movement, the Republican Party, the Wall Street giveaways at the expense of jobs, tax cuts for the “filthy rich” and corporations, budget battles and cuts in government services and entitlement programs, rampant anti-environmentalism, and anti-minority, anti-immigrant laws and attacks.

Finally, we behold a worldwide global awakening. As the strains of war and financial oppression increase to a point no longer bearable, the American mind reawakens, beholds the obvious lies that have created the matrix of their lives, and sees more clearly….

Michael Adzema is a writer, activist, teacher, and psychotherapist. In addition to Culture War, Class War, he has authored the books, Apocalypse Emergency; Primal Renaissance; Apocalypse NO; Experience Is Divinity, and Falls from Grace, which is listed as a reference on prenatal and perinatal psychology. In the last decade he authored and managed the popular blogs and websites, Culture War, Class War; Apocalypse No; and Things That Want to Be Said, among others. In the early Eighties, working as an anti-nuke activist with Oregon Fair Share, he was one of a small group of people whose actions led to the lawsuit that ended nuclear plant construction in the United States. He was the editor of Primal Renaissance, a professional journal of primal psychology, and was the first person in the United States to teach prenatal and perinatal psychology at the university level, which he did at Sonoma State University in the early Nineties. Culture War, Class War: Occupy Generations and the Rise and Fall of “Obvious Truths” is the first volume in Michael Adzema’s Return to Grace series of ten volumes, of which four are currently in print and six more scheduled for publication in 2014 and 2015.