“Killing “The Sixties”: The responses of the 1% to Sixties activism “were calculated to placate the masses and keep them, as for hundreds of years, feeling nervous, unworthy, inferior, and slavish in relation to the wealthy and powerful….” 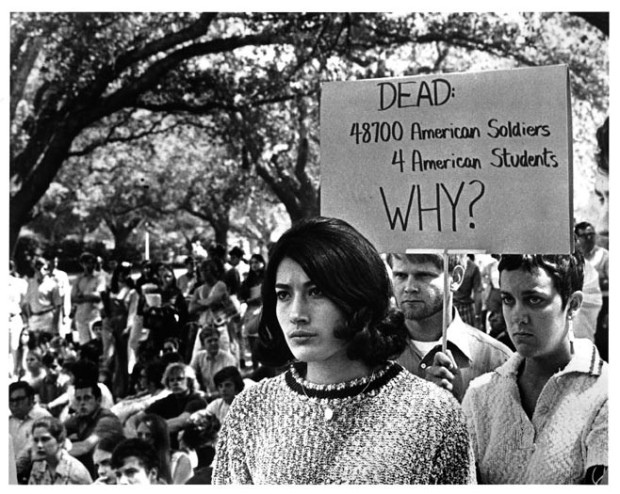 “What happens to a revolution not televised:

“Others have asserted that the media played a large and active part in the “disappearance” of this generation. It has been noted, for example, as simply one indicator, that 90% of youth protests were reported by the media in 1969, but only 20 to 25% were covered in 1970-71, and only 1% of such dissident activities could be found in the media coverage of 1972.

“One could argue in response to this that demonstrations were becoming commonplace, so they qualified less as news as time went by. But this reasoning does not fully explain the precipitous nature of this decline, nor the resulting virtual elimination of coverage. In respect to comparable events of recent times, such a pattern has elicited the label “media cover-up.”

“It is therefore much more likely — and there has been evidence and published commentary to this effect — that this decline was part of a concerted effort by the media, in collusion with the threatened established sectors of society, to actively put a lid on student and youthful dissent and unrest.

“Keeping the People Down

“I myself have knowledge and personal experience of how a similar suppression at exactly this time was perpetrated on university campuses.

“Specifically, at the college I was attending — Franklin and Marshall College in Lancaster, Pennsylvania — and other colleges and universities around the country in 1971, wealthy alumni threatened to withdraw funding unless (1) certain faculty members, considered “threatening” to established interests, were fired, (2) certain programs — considered too innovative, “disruptive,” or “instigative” — were cut back or eliminated, and (3) certain “unorthodox,” “undisciplined,” or “publicly disrespectful” student behaviors were discouraged, suppressed, and/or harshly responded to and clamped down on.

“The total remaking of society, so such a generation would never arise again

“Indeed, such active “blacklisting” of counterculture figures, behavior, and values on university campuses seemed to be part of a general dictum across institutions — including publishing, films, TV, education at all levels, medicine and science, and the work place — to actively fight back at what was seen as dire threats to traditional mainstream values — values, incidentally, that were calculated to placate the masses and keep them, as for hundreds of years, feeling nervous, unworthy, inferior, and slavish in relation to the wealthy and powerful….”

– excerpted from “Culture War, Class War: Occupy Generations and the Rise and Fall of ‘Obvious Truths'”

This entry was posted on October 22, 2015, 9:33 pm and is filed under activism, America, book, Class War, Culture War, Culture War Class War, education, Generations, History, media, Michael Adzema author, occupy, occupywallstreet, sixties. You can follow any responses to this entry through RSS 2.0. You can leave a response, or trackback from your own site.